Is it getting hot out there New Orleans?

Fifteen years ago, standard air conditioning units were about 8 SEER (Seasonal Energy Efficiency Ratio).  In lay terms, SEER can be compared to miles per gallon (MPG) when driving your vehicle.  Today the minimum standard for an air conditioning unit is 14 SEER in Louisiana. ( Geothermal units can be up to the equivalent of 55 SEER. ) Electricity prices have also risen in the past two decades which means that the ownership of an older air conditioning unit has become a financial liability, to the point that after the average family’s mortgage, utility bills are the next most significant expense.  Not to mention that older equip sometimes requires more expensive repairs.   The typical household that installs a new unit can expect to use 40% less energy, resulting in significant savings on utility bills. Another more valuable option, is to install a geothermal air conditioning system. Geothermal units extract or reject heat from the ground (this is the source of energy).  Geothermal systems are highly efficient and results in reduced carbon emissions on the planet.  While running, geothermal units can also provide free domestic hot water and better dehumidification for one’s home.  Geothermal units also have two other major benefits:  there is a 30% federal tax credit for installation and geothermal systems generally last twice as long as conventional units.   The typical cost savings on utility bills with a geothermal system are 40-60%. (Compared with conventional high efficiency units). With geothermal units there is no outdoor equipment (so there is nothing to be vandalized or stolen).  Geothermal units are also quieter than other systems (noise is often considered a pollutant as well).

The replacement of the air distribution system (Ducts) is not usually necessary.  However, any time a new system is installed, the duct system should be updated to meet new efficiency standard.  It is highly recommended that a duct sealing procedure is performed when you have a new air conditioning system installed.  Updated duct systems have the added benefits of reducing indoor air pollution and health problems and providing substantial energy savings.

When Mena AC and Heating technicians go to a home or business we do a complete evaluation of the the air conditioning system and make a set of recommendations based on improving efficiency and health.

Because we understand that investing in  a new HVAC system can be significant, Mena AC and Heating offers flexible payment options (as low as $125 per month).

Get your ducts in a row this summer 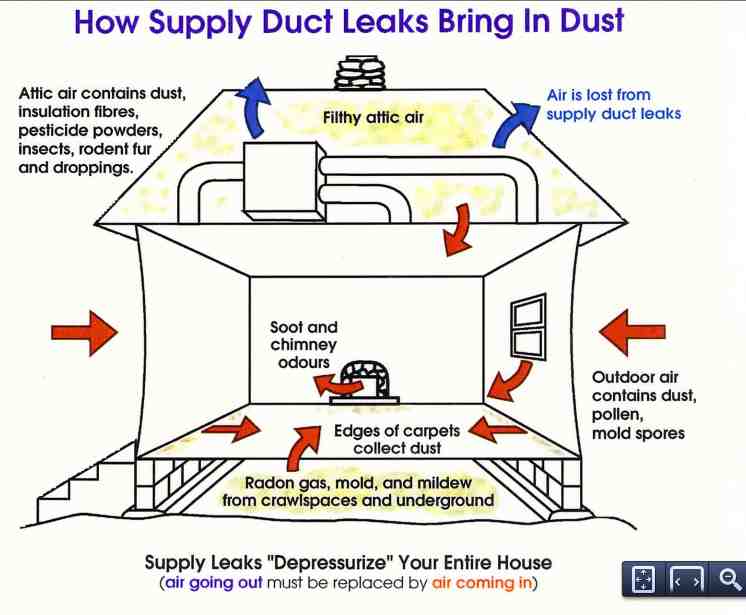 As the weather heats up air conditioning becomes essential in New Orleans.

This summer, you may want to contact an HVAC contractor that takes a “whole house” approach to air conditioning. Raul Mena, the owner of one of New Orleans' premier air conditioning services says that his company, “looks at the entire home, the efficiency, the indoor air quality, and comfort. We review the air conditioning system performance and we inspect the air distribution system to make sure it is airtight and dust/mold free.”

Duct leakage can lead to major inefficiencies in an air conditioning system and can result in 30-40% higher utility bills. Duct leaks can also lead to outdoor air being pulled into one's house, forcing your HVAC system to run longer and harder to do the job. Duct leaks can result in cooled air (or heated air in the winter) being pushed into your garage or attic.

Because much of our time is spent inside, indoor air quality is critical to your family's health. Improperly sealed and maintained ducts can result in indoor pollution. This poor air quality can lead to asthma, allergies, and a number of other environmental illnesses. Over the years, Raul Mena has helped many New Orleans families identify and ultimately eliminate the cause of indoor air pollution in their homes.

Mena says often times a person will contact him because their air conditioning system isn’t cooling properly or is “under performing.” Often the cause of the problem is either improper duct sizing or a leaky duct system. Ultimately the air distribution system may not be balanced properly. By performing a duct leakage procedure Mena is able to quickly identify the source and find a solution. If a duct sealing problem is discovered the solution is to apply a mastic adhesive and then conduct a duct leakage test. The leakage test is done with a device known as a Duct Blaster, which pressure tests the air conditioning system. In more severe cases of duct leakage it may be necessary to replace air distribution system and ensure that it is properly balanced.

In addition to duct leakage problems there are a number of other issues could cause a an air conditioning to perform poorly. Poor maintenance, over sized or undersized equipment, and/or an improperly installed system are all potential culprits.

Raul Mena has been in the air conditioning business for more than four decades. Over that time Mena has developed innovative services for his customers. His company Raul Mena, Inc. has been a the forefront of deploying highly efficient geothermal air conditioning systems in the New Orleans area. Mena has done a number of major New Orleans based projects including the Spanish Stables condominiums, the Spanish Custom House (the oldest standing house in New Orleans). Mena has twice starred on the PBS show "This Old House." Mena's team of highly trained technicians have more than 100 years of combined experience in repairing and installing air conditioning and heating systems.

Does your AC need a spring check-up?

It is mid-march and the weather is warming up in New Orleans.  Unfortunately this is also the time of year that many people discover that their air conditioning system may need some TLC.

You may notice the following about your air conditioning system this spring:

1.  Your system is not keeping you as comfortable as it did last year.

2.  Your utility bills seems too high.

3.  Your system doesn’t keep up with the settings on your thermostat.

5.  Your air conditioner won't work at all.

Don’t be afraid, Mena Air Conditioning can help you out.

Fortunately, many of the these problems can be fixed with simple maintenance. This is the time to call Raul E. Mena Air Conditioning and Heating.  Mena Air technicians will perform a spring check-up of your system to make sure that your air conditioning is at its efficient best.

Unfortunately, every once in a while a unit needs to be replaced.  The good news is that a new, efficient air conditioning unit will save you a significant amount of money on utility bills while keeping you comfortable for many years to come. 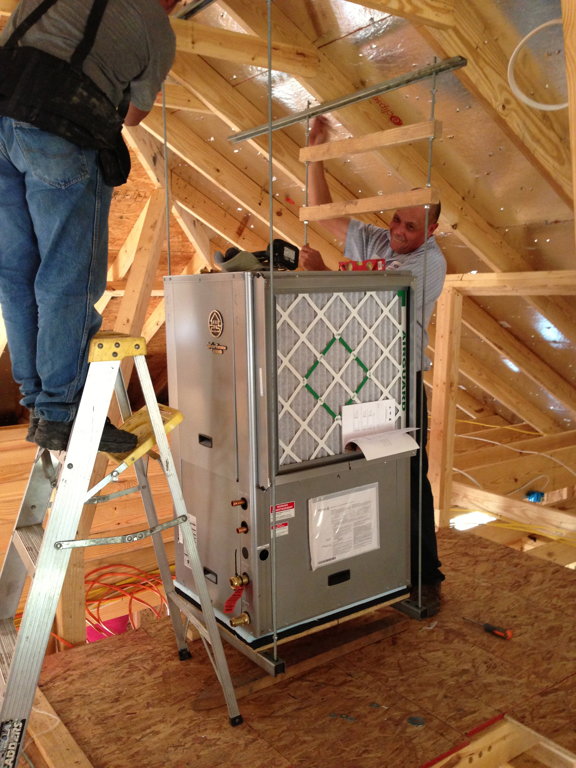 We understand that the cost of a new system can be daunting.  We are pleased to be offering clients in need of a new system a range of options...some as low as $125 per month. 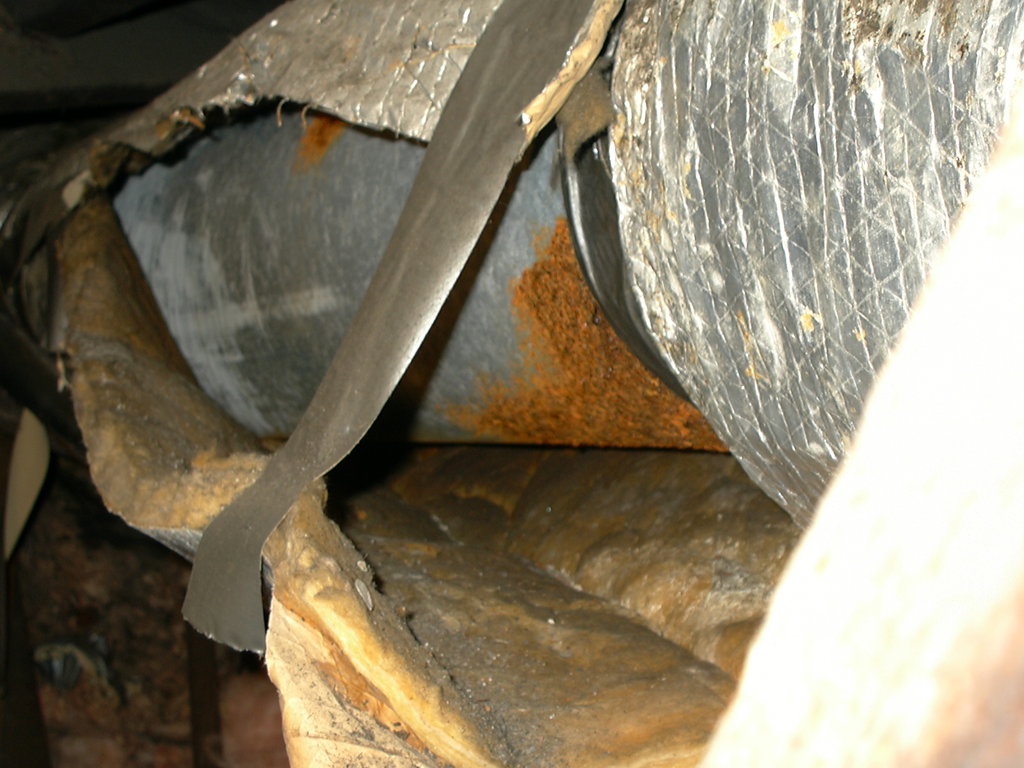 According to the US Department of Energy a typical duct system loses 25 to 40 percent of the heating or cooling energy put out by the central furnace, heat pump, and air conditioner.

By having properly sealed duct work your home can be healthier and more energy efficient.

Spring and fall are the best times to address your duct health.

Here are some reasons for duct sealing:

Comfort--your HVAC system will perform better because you won't be losing cooled air from the system or pulling in hot or humid air from unconditioned spaces such as attics and crawlspaces.

Pollution--properly sealing your duct system will reduce pollution from getting pulled into your house.  In addition, a sealed system will prevent mold and mildew from forming in your home.

New Orleans home owners can sign up for a free air conditioning, heating, and duct sealing evaluation by contacting us today.   Each time our technicians come out for an evaluation we look at the conditions of your duct system and give a report.  We provide your recommendation about how to make your New Orleans home safer and more energy efficient for the years to come.

1 Feb, 2015, 1 comment
Here is a link to interesting story about a new 7500 home and office space development in Austin,TX to be called Whisper Valley.   Developers of the project are aiming to have homes which have a fixed energy cost of $175 per month.

In 1977 Raul E. Mena started his air conditioning and heating Louisiana in New Orleans, LA. “At that time the HVAC systems were not as efficient. Air distribution systems were contaminated or not efficient,” said Mena. Over his career Mena has developed ways to improve HVAC system efficiency and improvement in indoor quality. Mena just launched a new website at www.menaair.com.

Mena has always built his business by taking a look at what's needed in the marketplace and developing new services and delivery systems. In 1989 Mena responded to homeowner's needs to have cleaner and healthier indoor air quality system by forming new division of Raul Mena, Inc. called Dusty Ducts. Dusty Ducts became first air duct cleaning company in New Orleans. Mena's next innovation was introduction of air duct sealing, renovation, and balancing. These services which resulted in savings for customers by as much as 50%. In Raul E. Mena archives, there is evidence of people's that declined from $266 in May 1995 to $133.00 in May of 1996.

These days Mena is the region's foremost expert in Geothermal Air Conditioning and is one of a handful of companies that actually regularly do these unique and cost saving installations. And Mena, always focused on delivering the latest technology, offers multi-phase systems with Wi-Fi controls—known as smart air conditioning and heating systems. Already Mena is on to the next generation.

Want to cut your utility bill in half and reduce your carbon footprint?

Mena, Founder and President of the New Orleans based company, has been in the HVAC business for more than fifty years. About fifteen years ago, in response to high utility bills and his concern for the environment, Mena began to focus on highly energy efficient Geothermal air conditioning and heating systems. At the time the technology was new and Mena had to build his own custom equipment (including drilling rigs) to complete jobs. Today, Geothermal is becoming more popular and although a system may cost a little bit more than conventional air conditioning to install, the long terms savings are substantial and the life expectancy of Geothermal systems are much greater.

Geothermal/ Geoexchange air conditioning and heating systems, use the earth's natural energy. According to the site:

In the winter, water circulating through pipes buried in the ground absorbs heat from the earth and carries it into the home. The Geoexchange/Goethermal system inside the home uses a heat pump to concentrate the earth's thermal energy and then to transfer it to air circulated through standard ductwork to fill the interior space with warmth.

In the summer, the process is reversed: heat is extracted from the air in the house and transferred through the heat pump to the ground loop piping. The water in the ground loop then carries the excess heat back to the earth. The only external energy needed for Geoexchange/Geothermal is the small amount of electricity needed to operate the ground loop pump and fan. It is more efficient and environmentally superior to 'transfer' heat than to 'create' it through combustion.

The site also explains a number of other benefits to going Geothermal including: significant tax credits (up to 30% back from the Federal Government), reduction of utility bills, lack of outside equipment to be vandalized, and environmental benefits. Financing for Geothermal air conditioning systems is available.

For more information on this innovative technology check out the Menaair site.